Righto so its been a fair while since I last looked productive and il be honest THAT HAS NOT BEEN THE CASE, working my ass off in a supermarket so that I could get to a position where I could have options in where I wanted to start up my career and life, so with that I have indeed moved to a lovely area and am now taking the steps to use this degree........Oo yeha I got my degree btw so yeah with that my life's looking alot more productive in a sense that im going in a direction that im happy with, well enough tosh and more games stuff, myself and a few other designers are in the middle of making a game at the moment and although I cant
show you everything I can at least prove that I learnt something from Uni! 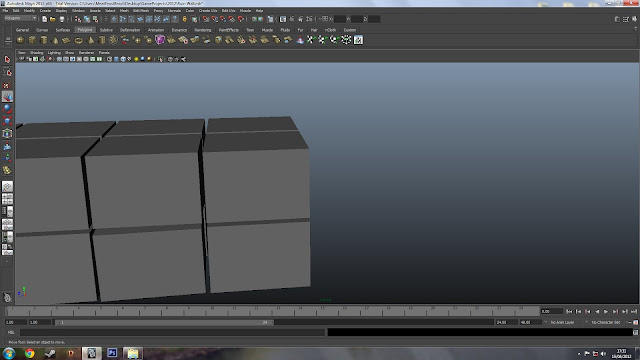 I've been tasked with sorting out some environmental stuff, trees, rocks and that kinda stuff that no one realises until its not there then they call the game bland. So time to turn this blocks into BRICKS! 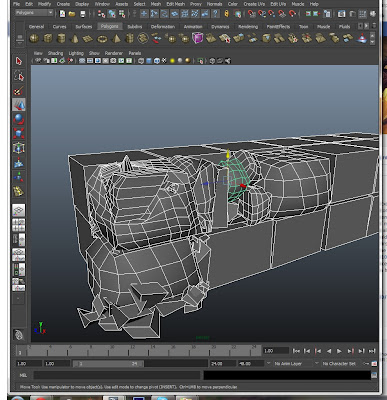 Starting to look good isnt it???? Hmmm??? well here is some more! 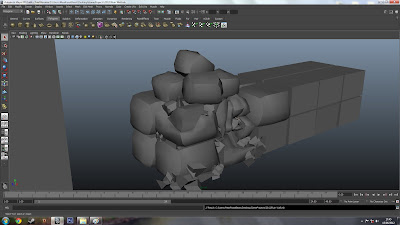 Starting to look a bit more like a broken old ruin wall now. 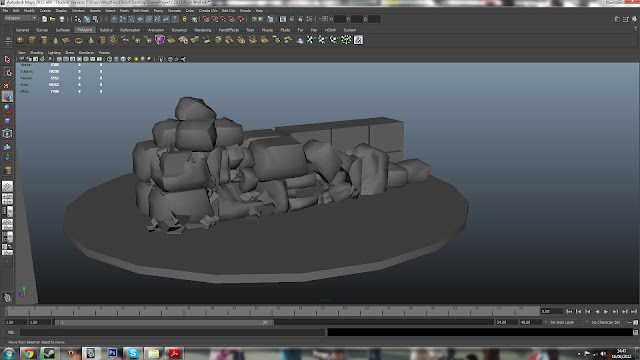 Right you seen'em below but I wanted to create epicly tense pictures which could only be achieved through individualized shots..look at the intensity, the lust, the passion!!! 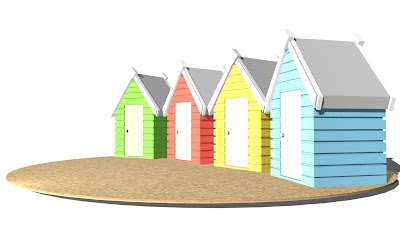 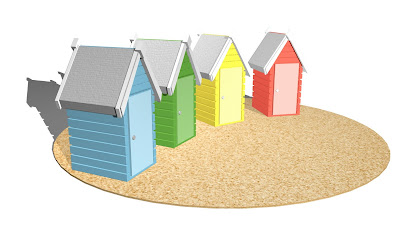 And now for the "piece de resistance" of windbreakers..well windbreak 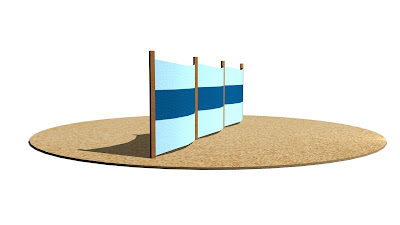 Posted by Benjamin at 10:30 No comments:

Has been a far while since I put something on me blog!! And in all fairness its because I have actually been doing work this time, Skyway is still going on, the team itself has been working very hard to figure out mechanics and elements to implement into the level design. We are still using UDK as are engine and development kit there's alot of technical options and techniques but once learnt give way for some very interesting level assets, we set out in mind with what we wanted regardless of what engine we used and as of yet have not had to compromise on a great deal at all. So with the level stuff being worked on for quite some time we all decided to get on with the characters and get them model'd, textured, rigged and finished so that we could divert our attention to the level in time for grad show (Too which I have landed myself part of the rep team, "nice one Ben") the one I took on was the beautiful but....somewhat bold Mrs Docherty I received the author-graphics from Ollie E our lead character designer and got to work in her straight away.

Mrs D herself is quite a broad lady, and quite hip heavy so I had to take that into account when starting a model for her as we didn't want any problems when it came to fully animating them later on. 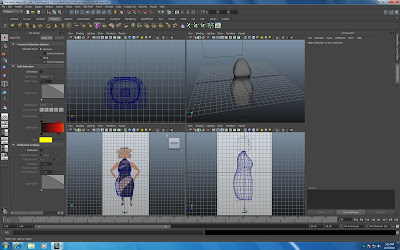 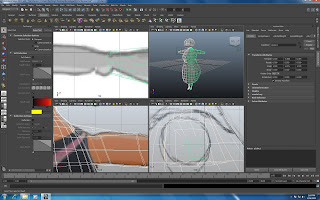 Mrs.D arms and head were quite a challenge as I havnt done that much character modelling before as alot of my stuff has been environmental and not "bingo wing specific" but I thought this would be a great way to improve myskill set, picked up alot of new techniques along the way aswell. 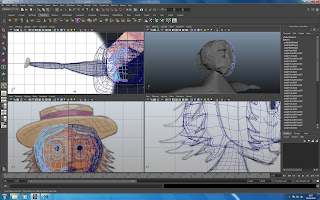 The Hair was an absolute pain staking task if I can give any modeller advice it would be to find a better way to do it then I did, trust me using a vertex tool to change around 250 vertices is not my idea of fucking funny!


With everything modelled correctly I moved onto applying textures! This is my favourite part because you see the character really come to life but then again this process can break a lesser man, when he sees all his texture spikes if done incorrectly or if done correctly yet Maya sees fit to play with you patience. 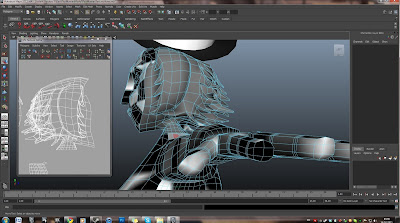 Now this is the part you don't get to see, my UV maps are secret as there's a ultra uber special super duper street fighe...... sorry I mean you just don't get to see this. But I shall however show you the final textured lighted Mrs. D 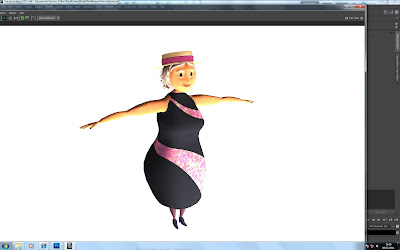 Now shes working in Maya we needed to chuck her into UDK to see if everything appeared correctly in engine and by the power of gray-skull everything seemed to be fine so here a picture of MD in engine bit darker this time. 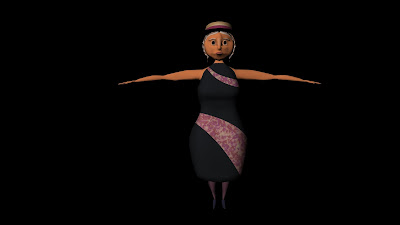 Alrite now that's done here is some of Mrs.D chilling out in the sun catching the tan as she has to absorb sunlight to keep her lovely tan on a regular basis. 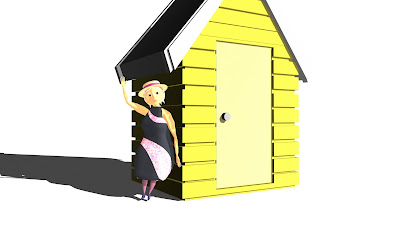 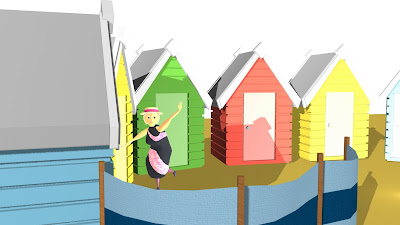 The beachuts and wind break are modelled and textured by me as well I post them up later as well but for now you can just marvel and the beauty of Mrs.D
Posted by Benjamin at 10:00 No comments:

So its been ages since I last posted so I feel bad so I'l put something up, Saw this little guy on my drawing wall and though what the hell I'l have a quick blast at modelling him, He is very simple and actually came from me drawing a weapon from the front view and I saw him in the concept!

Hes still in alpha phase but you can get the idea! 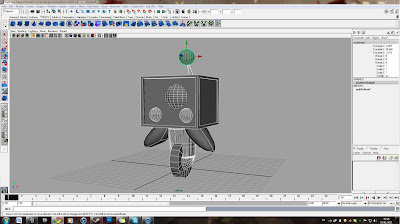 Posted by Benjamin at 18:36 No comments:

The start of a pinnacle in games design.....

The past week had been thinking about the start of a bit of light publicity for our game so we have begun the process of setting up a page on IndieDB a site which allows indie games to show off there work and a good place fore publishers to have a look at the ideas of young a talented minds :D..... But yeah we started up our group/company name if you like and with that I was set task along with my advisor Ollie L of creating a logo for our name...Team name...Company... Urgghhh I shall refer to it as our "Team Name" for now but yeah so we started to looking into our name which is SkyBox Games so with that looked into the ideas that came along with that name. Looked into ideas such as a sky landscape with a few images surrounding the landscape or some snazzy writing with a cloud underneath the text things such as this went on for hours but we finally wrote down and did some drafts of stuff we actually were looking for. Anyway here is what has come up so far comments are always welcome ofcourse this is a logo in process so many variations shall take place but take a look for now enjoy....... 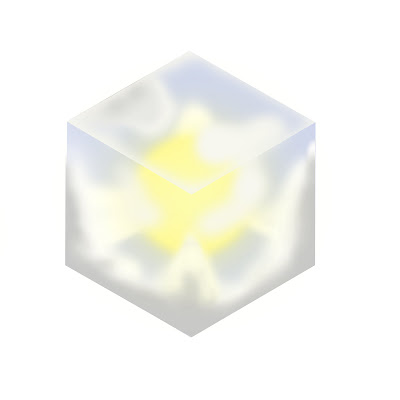 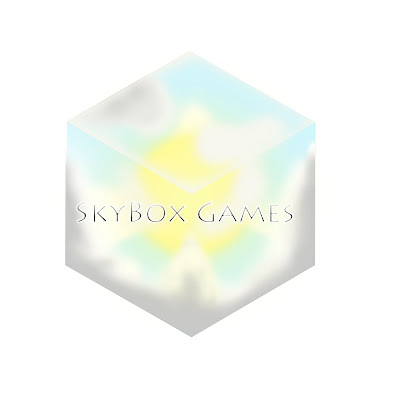 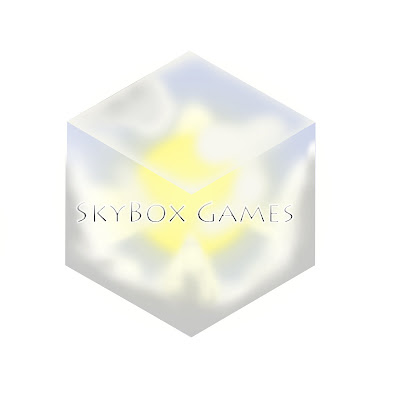 Posted by Benjamin at 18:39 No comments:

Ok so its been a few days sine the presentation but to stop confusion I though I would just start from now as the "up-to date" blog will now progress.

So the presentation well "Good news everyone" it went very well I thought lots of interested faces in the audience when myself and Ollie L talked about various elements and kept everyone up to date with the progress people seem to take the idea and stylization well, And were impressed with the prototype video that Ollie E and Rich C managed to create as was I as I had only seem it a few hours previous but it showed off alot of mechanics and ideas we were going to implement into the full game which again was well received, There were a lot of questions after relating to the concept which I had a answer for all so we must be doing something right. A few ideas for reference which I will be checking soon. It was very nice to see others work as well some interesting ideas and concepts from everyone a lot of which I could easily see myself wanted to play when taken to that level. After the lesson it was time for reflection and a quick break before our tech session, Tech was good we worked on creating lights that changed when a certain event happened so in this instance it was turning and coding a light to go from red when in "closed" position to green when in "open" position this was interesting and I can see this kind of code coming in useful in future.

Well for those of you that wish to check out the video we had shown it is below.. the main aim is to show people the water cube mechanic so there are no textures just a player and the environment, this is exciting for us hope you enjoy.

Over and out till next time which will be weekly.
Posted by Benjamin at 18:38 No comments:

Right we have presentation coming up soon I have done a few for the group so far but this time were going to be showing come gameplay elements and level designs that we really like so I'm hoping this one goes well as some of the stuff we have I really think would be cool but we shall have to see what the masses think. So there's been more mental activity again rather that physical production from me this week however I do have a few things to show... As we have settled on creating a pier for our vertical slice of game that we will be creating to show off the game I have started to look into various "sea side-ey" images and Ollie E has sent me images of piers that he informs me haven't burnt down yet so I have been using them for reference to come up with a few ideas. 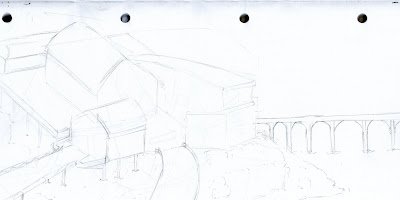 Sorry if the image is slightly unclear but it is quite rough its basically a little sketch on a pier structure so I can pick out a few key points to implement into a design for our level. As I will have to take a structure that's is essentially rectangular in shape and fixed to a floor surface and take both those elements away this is going to be both interesting and fun. Lets give it a go....... 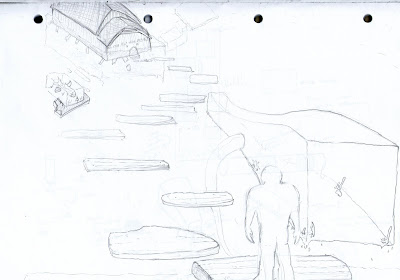 Hmm not happy with this some of the ideas a good but mehh im not sure about this and thus I will not show it in the presentation I'l come back to it after a revised thought on it. So there we go we have Ollie E and Rich C working on a prototype level and video to show off on the day and Ollie L is working on the presentation structure
and script so hopefully we are prepared and all goes well.
Posted by Benjamin at 18:25 No comments:

Benjamin
Hi, Hope all is well! If you have anything to add to my works weither it be critism or suggestions please feel free, also if you like my work and think I may be able to help you with anything please feel free to drop me a email at benjamin.williams1989@gmail.com! Other than that I hope you enjoy my blog and keep with me as I go trough stages of development, if you are interested in any methods I use or are stuck on a particular similar project don't be afraid to ask for my help, I will help where and when I can.